10 Things to Do in Biei, Hokkaido in the Summer

Welcome to Biei… If you love nature, the outdoors, the quaint countryside away from the city or a typical shopping mall, Biei truly hits the spot.

Summer in Japan, Hokkaido specifically, is most popular for its multitude of flower farms! Tourists (myself included) brave the dry, burning heat just to get those damn “do it for the gram” shots. 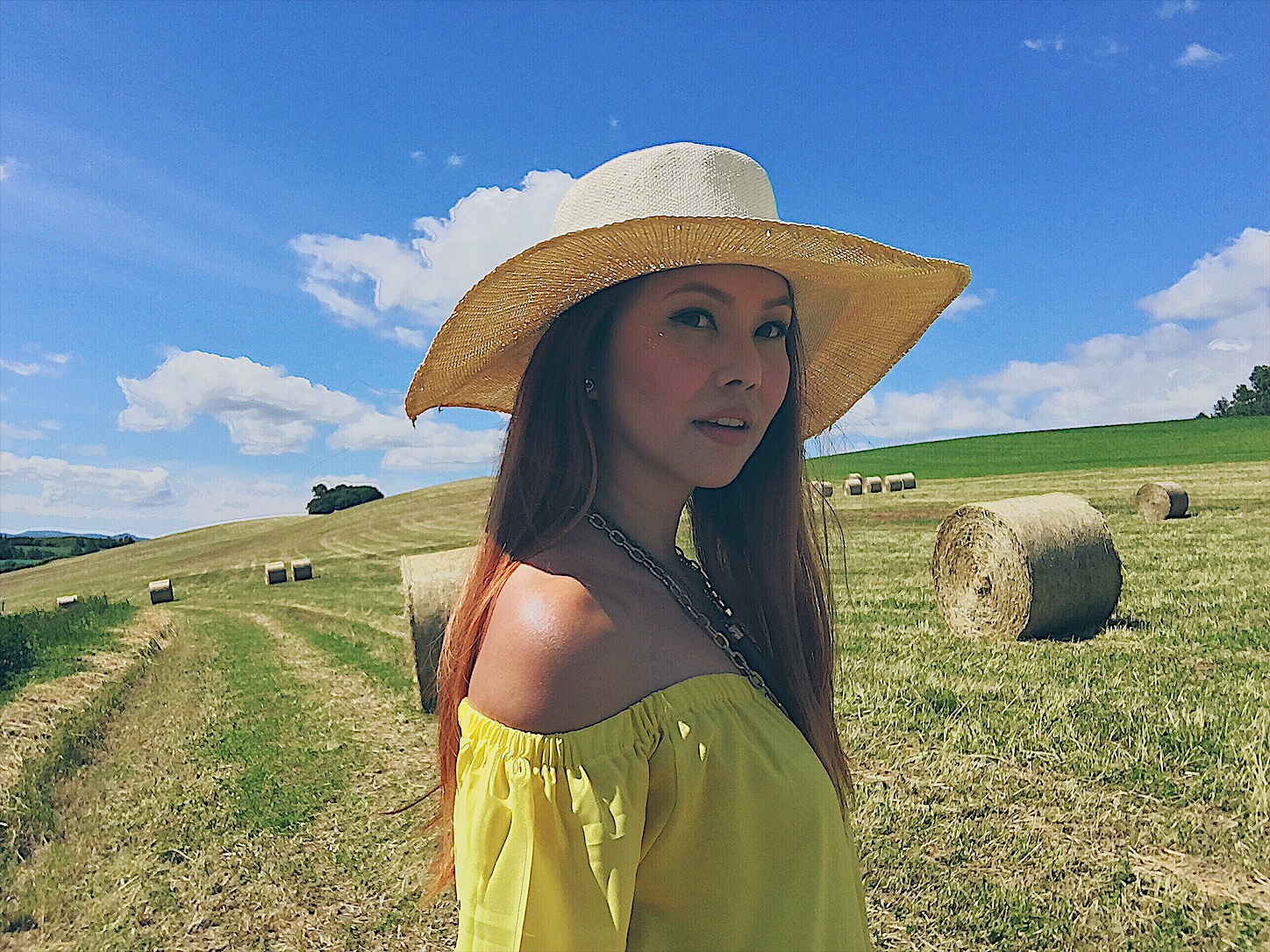 However, beyond the manicured flower farms are sprawling landscapes as far as they eyes can see. Such a refreshing & joyful contrast to be surrounded by if you’re looking to get away from the chaos of city life. 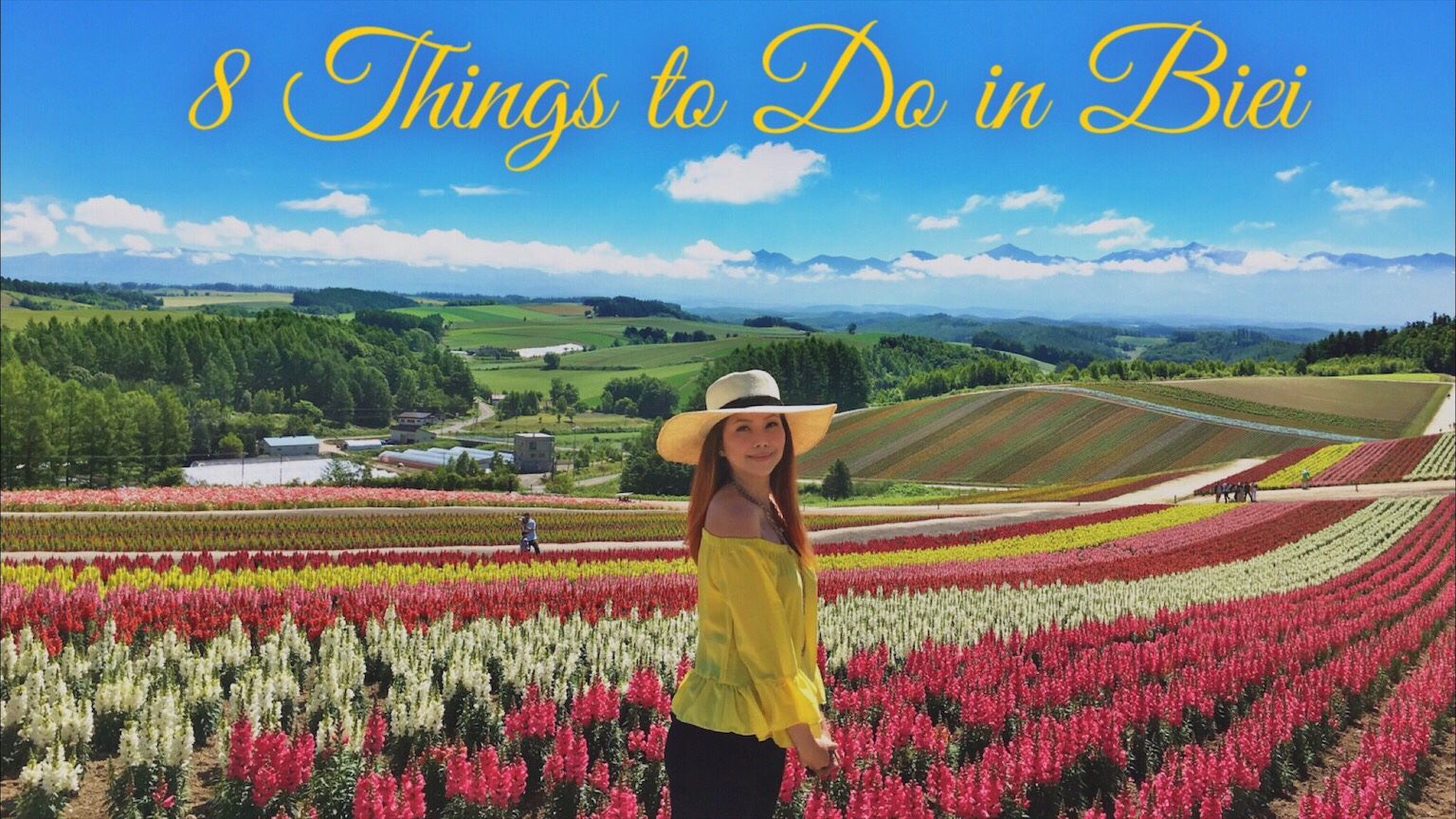 Let me introduce you to the town of Biei.

If you’ve been following this website from day one, you may recognize this vibe as Biei is the very first place I featured.

Today’s episode ushers in upcoming summer months with Biei at the top of my recommendations of places to visit in Japan! Here are just some of the things to do in Biei:

Biei is a small town where you can either drive your own car, join a tour group or like me, rent a bike! 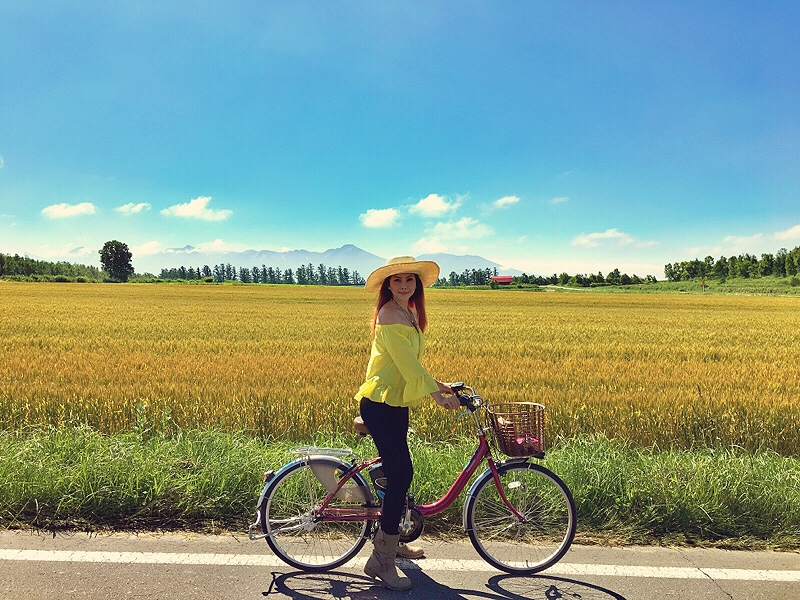 Versus a car, you can literally stop anywhere, take your photos, sit by one of its famous trees, watch the world go by without worrying you’re blocking the road or photobombing someone else’s or your own countryside postcard.

As you’ll see in this episode, roads would go on for days without a single person or car in sight that I got to goof around & literally, own the roads! So for someone like me who hasn’t ridden a bike since grade school, it felt absolutely safe and as they say, “you never forget.”

Thanks to mobile GPS, you can easily navigate your way and with very gentle hills all over the town, difficulty is at a bare minimum or if any for that matter. 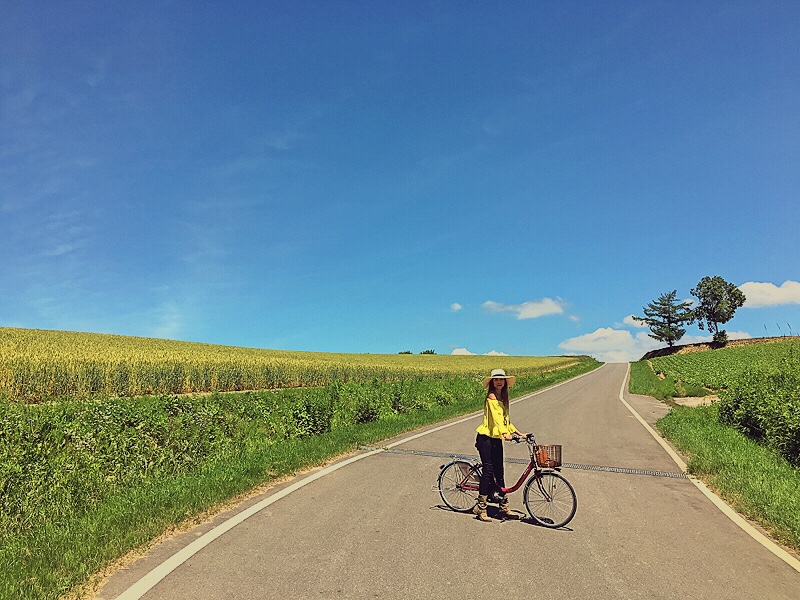 This is probably my favorite from the list. Perhaps it’s because I’ve never done such an activity in all my travels. Refreshingly different as it’s not another train, plane or car.

As dramatic as it may sound, my soul came alive being in blissful solitude with nature. Then breathing in that clean air while getting that endorphin rush from the cycling exercise in a place I’ve never been to before in one of my favorite countries in the world is a feeling I will never forget. 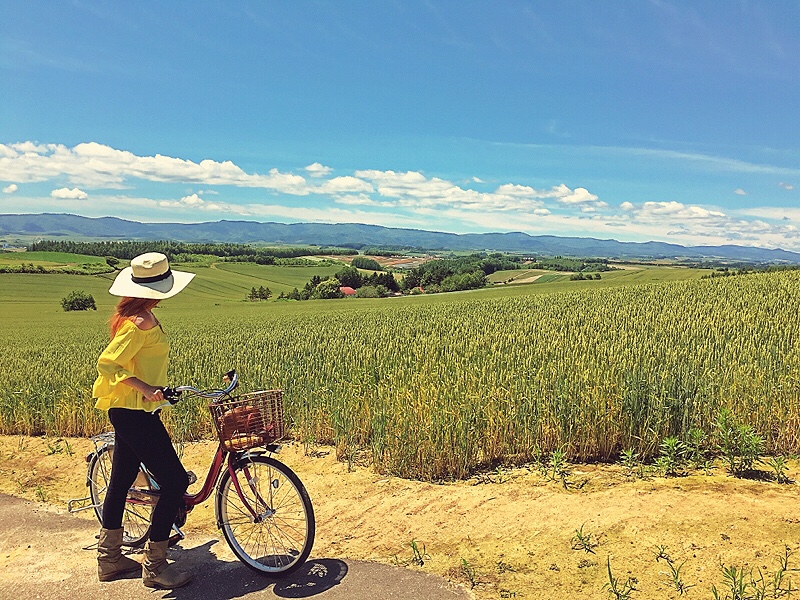 It was a plethora of so many things, endless emotions and yet also so back-to-basics: It was the definition of simple joys.

TIP: The scorching heat will dehydrate the fuck out of you and because Japan is dry, you barely sweat, which makes you notice the dehydration much less. Make sure you have water with you in your bike basket as you won’t find any 711 nearby.

TIP: There are several bike rentals outside the JR station in Biei.
As for me, I got off at Bibaushi. The station right after. There’s only one bike shop beside the station.

This is the showstopper in every Biei travel itinerary you will ever encounter. Rightfully so. I mean… look at it. 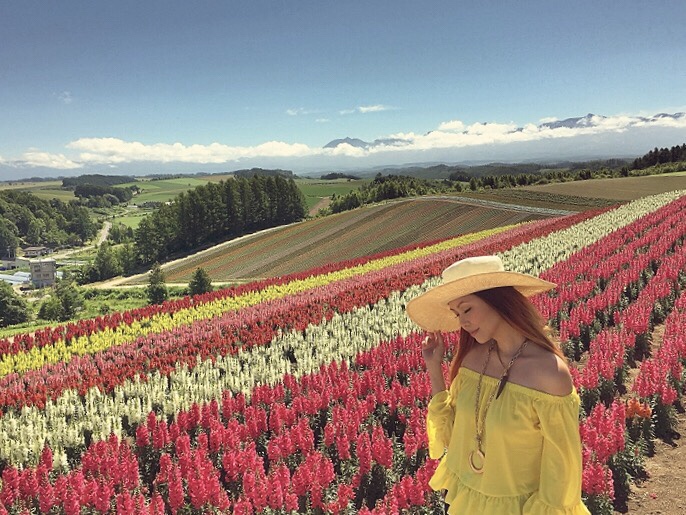 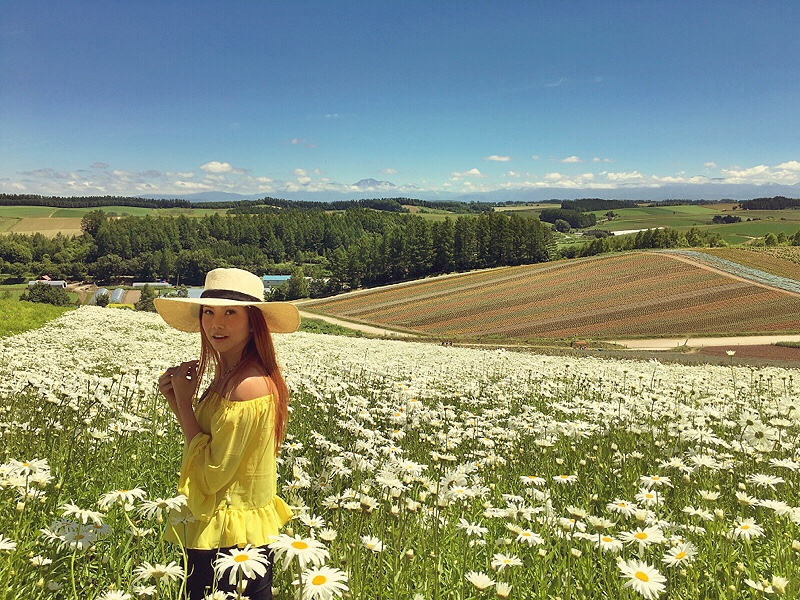 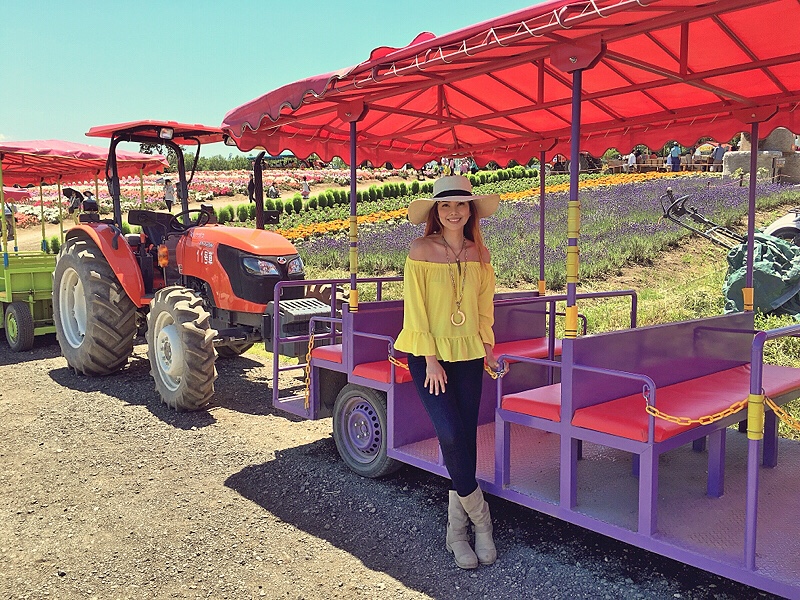 I share so much more about this flower farm in Top 5 Hokkaido Flower Farms.

TIP: The Japanese are some of the kindest, kindred people in the world. So if you do not want to get screamed at by the farm’s caretakers for stepping over the flowers or walking within the flower grids just for a damn photo, do not be an asshole tourist. I’ve seen it firsthand. 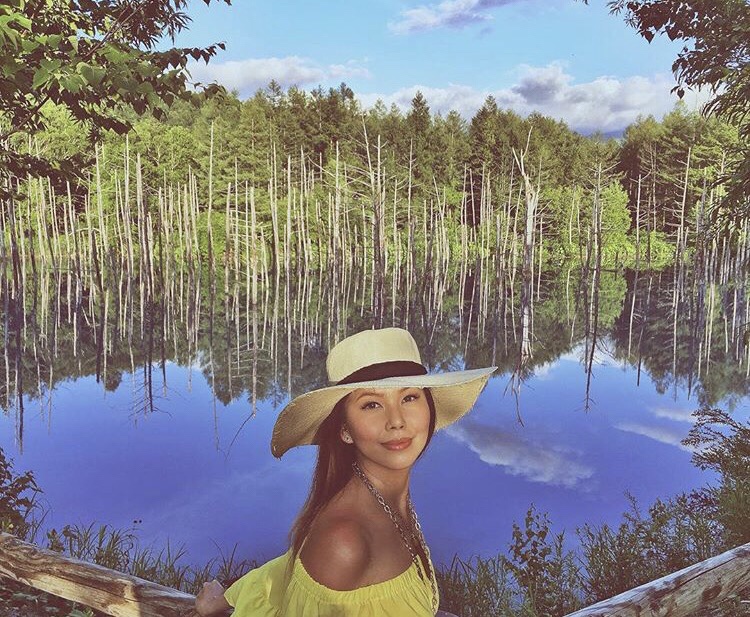 When a certain place makes it as a wallpaper for MAC iOS, you know it’s worth a visit.

The Blue Pond is one of the top places to visit in Biei.

TIP: If you’re taking the bus, the schedules are pretty tight from my time there as shown in today’s episode. Time management is crucial for certain places like these where there are only a number of trips per day.

From professional nature photographers to mobile photog wannabees like myself, Biei is one endless Instagrammable “backyard” of possibilities! 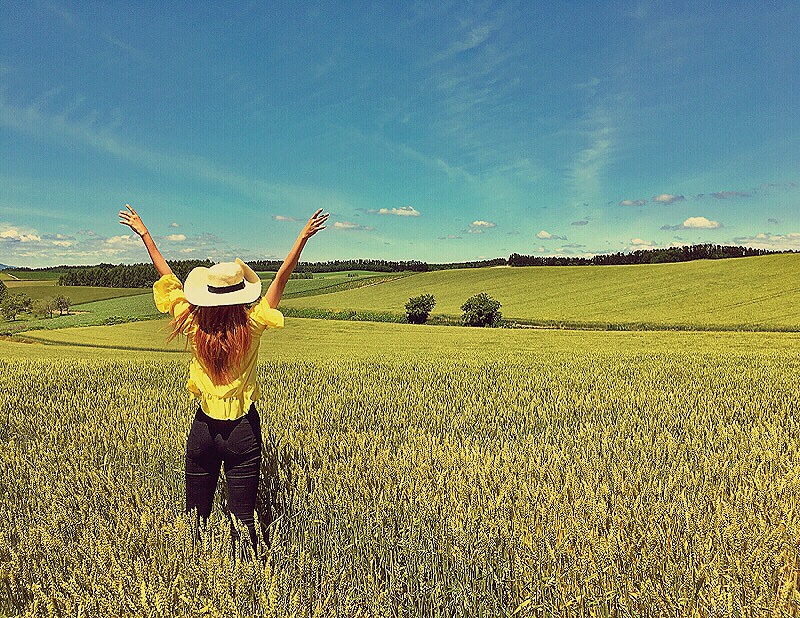 A popular attraction that I honestly didn’t realize at first are the hay bales or hay stacks all over certain crop fields. 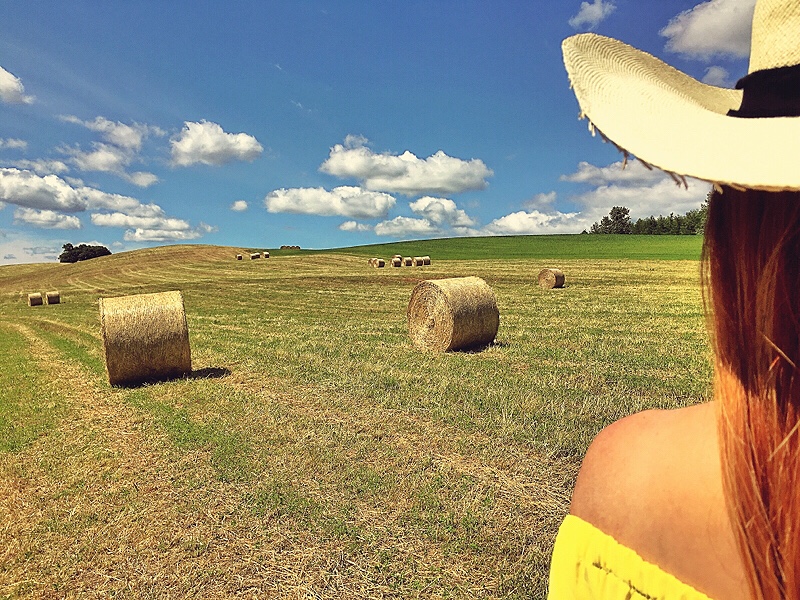 Then just like that, there goes me busting out my phone but respectfully waiting for all of them to leave first so I could get my cheese du jour shot, haha! Classy. 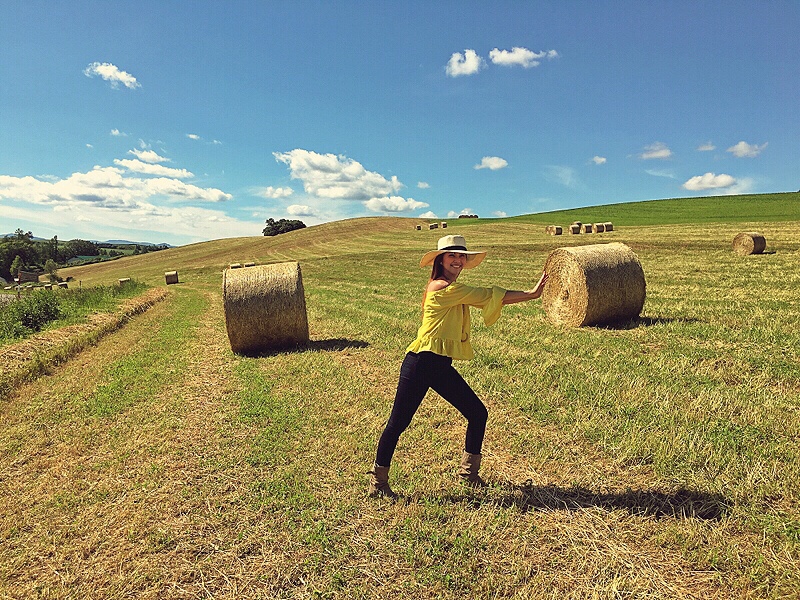 Note: Though it may not be obvious, most of these crop fields are technically private property so please be guided accordingly and do not trespass.

The observatory is known to boast some beautiful sunsets. 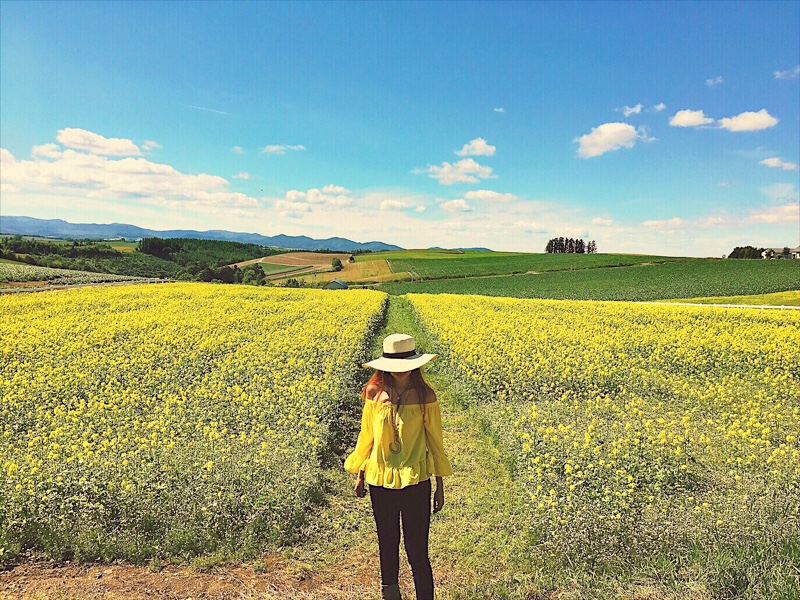 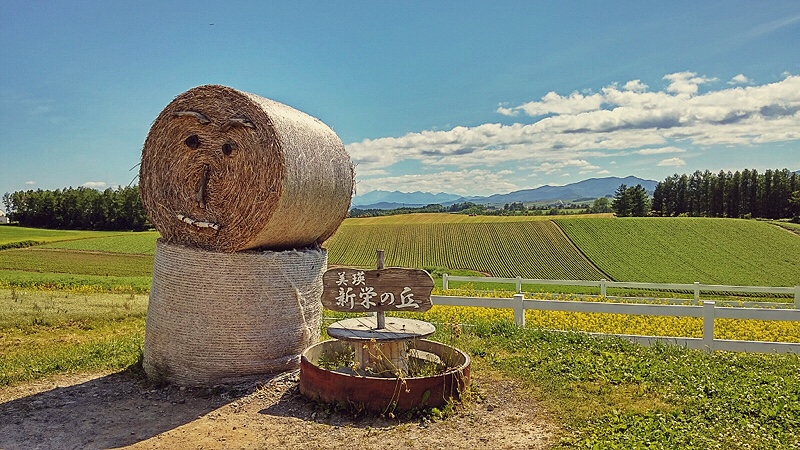 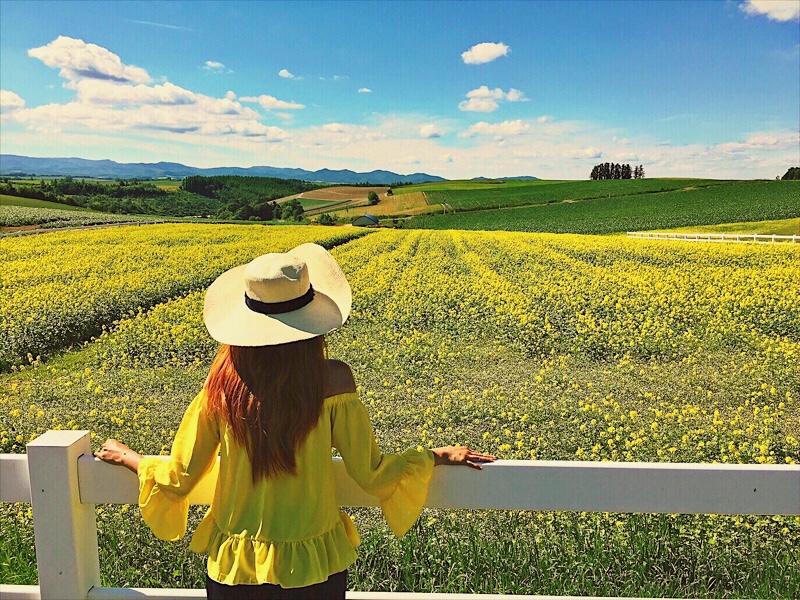 Thankfully this will be a good pit stop as there’s a small shop and clean toilet.

Right across the road is an iconic photo that’s often a classic representation of Biei: the lone red house in the middle of patchwork fields. 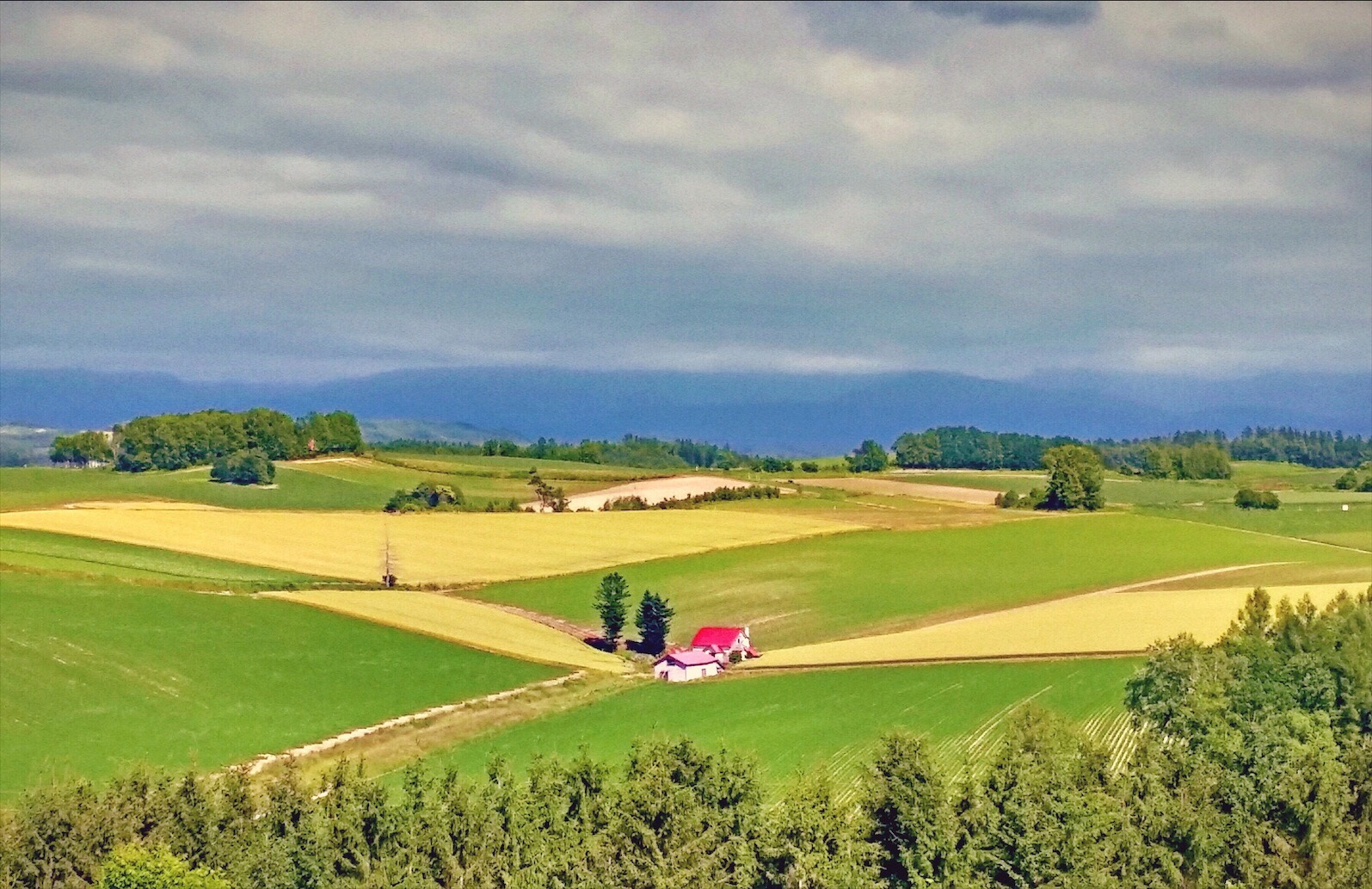 6. Enjoy a Michelin-Star Meal at Asperges

Biei, if you haven’t already noticed is a haven for crop fields. Some of Japan’s best agricultural products come from Biei. 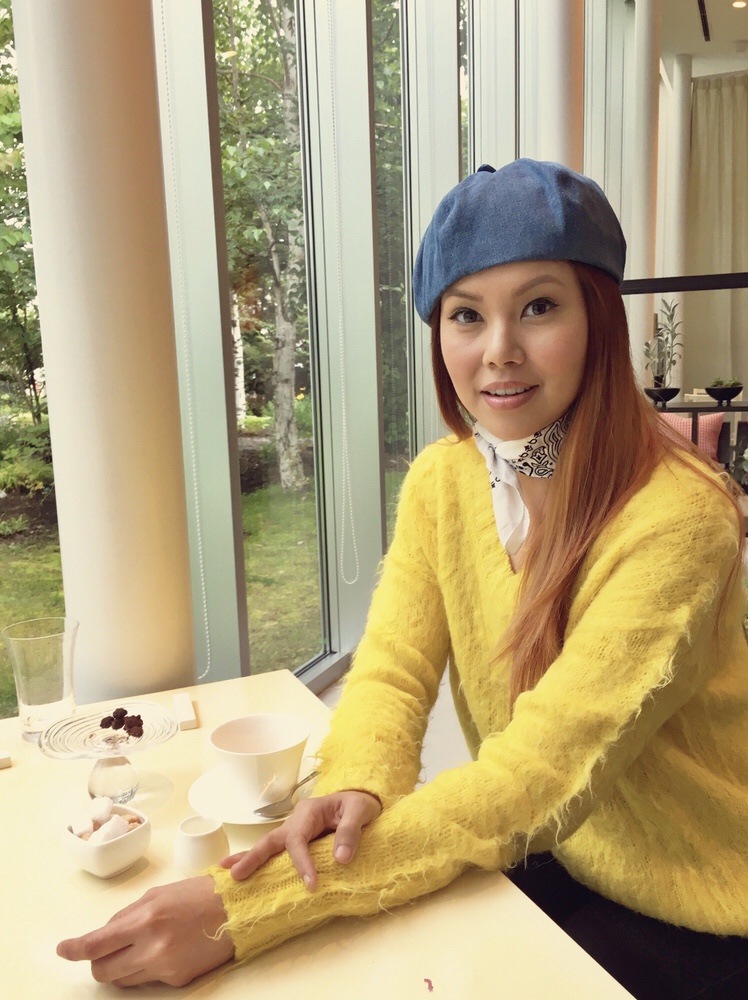 I show more dishes on the VLOG from the set menu that comes with choice meat. Unconventionally, it’s the vegetables that are actually the stars of the show. Like a work of art, seasonal Biei harvest are served so visually enticing that you don’t want to eat them anymore!

The veggies are lightly seasoned as the chef wants you to taste the natural flavors of the vegetables themselves. As a vegetarian, yes it was an absolute delight but I was in need of more food after, oh dear!! Sorry chef! 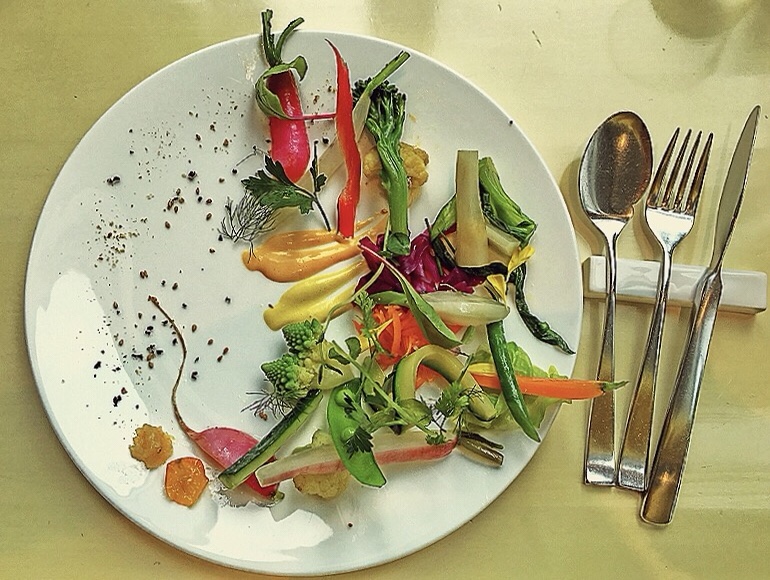 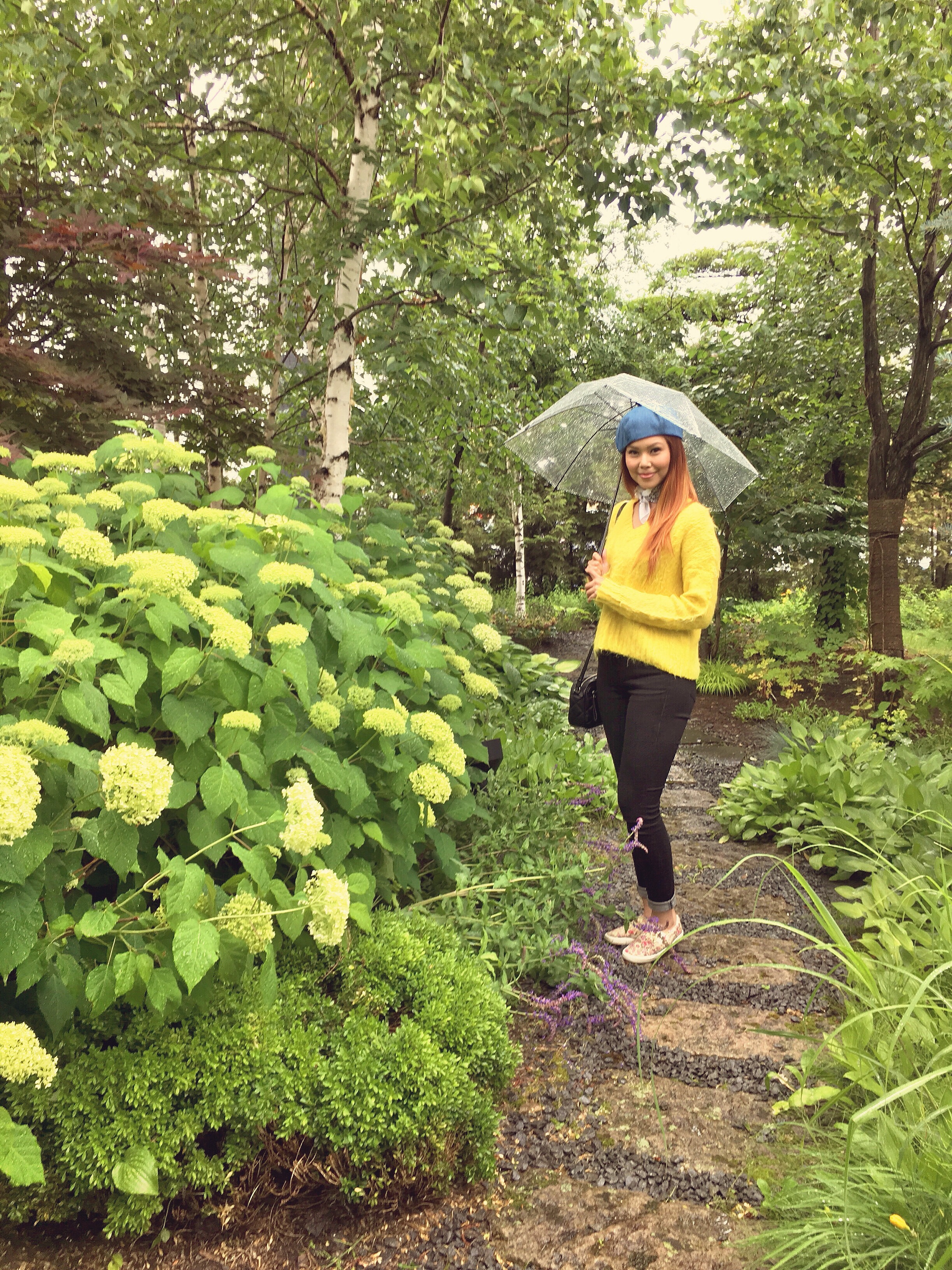 Note: If you’re expecting big servings, then this meal isn’t one of those as French cuisine if often delicate & smaller in quantity. It’s more about the experience versus the CP (cost performance or value for money aspect). Also, make reservations as there’s a long cue.

Like a local more upscale farmers market, you can shop for Biei’s famous produce here.

My photos from here got corrupted so here’s one from the official Biei Senka tourism site. 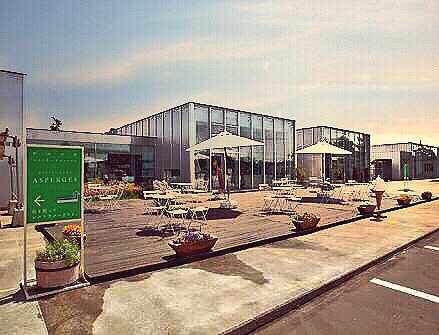 From my visit, there’s a cafe, a bakery, a wheat factory, and Asperges. The perpetually sold out item is the immaculate corn bread. Yes, I said immaculate.

Biei Senka’s exclusive branch at New Chitose Airport is nearly always like ZARA on final clearance sale – DAILY. You’re lucky if you make the cut as only a number of batches are sold and a maximum of two boxes per customer only. 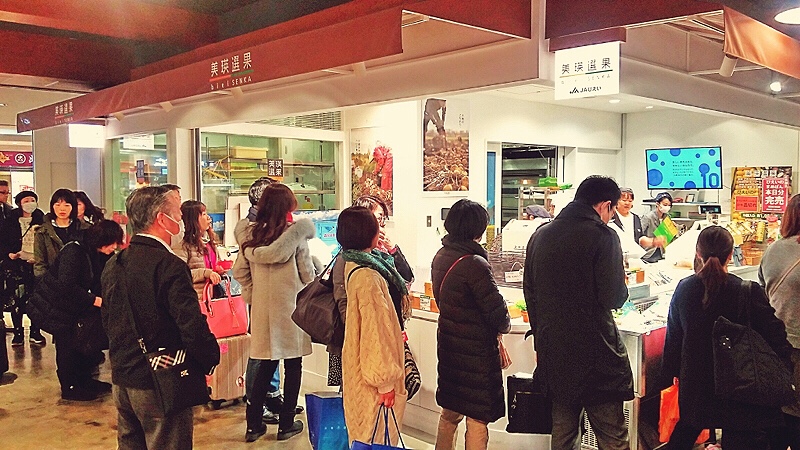 Doughy, soft, the only sweetness is from the succulent corn kernels. Personally, I LOVE BREAD so it’s easy for me to go gaga for this. It’s still worth a try even if you aren’t into veggies or corn. It’s the texture that really bags the gold and many are seen enjoying this with Hokkaido butter. 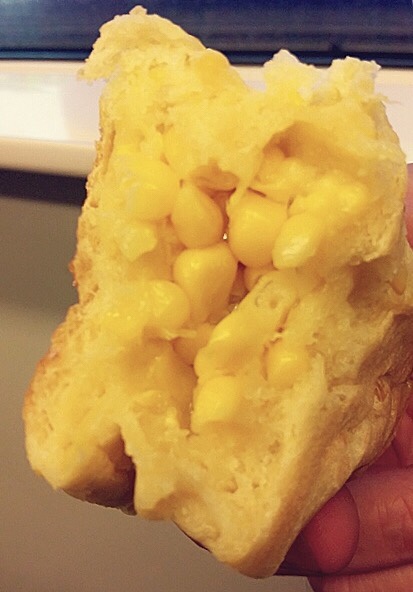 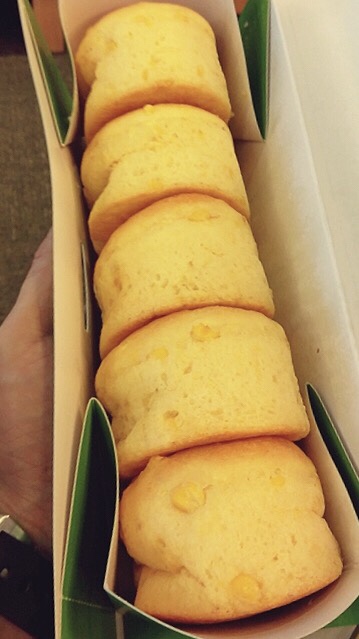 Tip: Biei Senka in New Chitose Airport posts its baking schedule online in the off chance it syncs with your flight or you can easily take the train coming from Sapporo, which is what I did. Eager much? Haha!

8. Take the Train South to Furano

Since you’re already in the area, might as well take the train that takes you to the other flower farms like Flowerland, Farm Tomita, Hinode Park, among others.

Even the train station itself is not your typical structure. What I love about Japan is no matter how modern it can get, it will never leave its roots of simplicity and in this case, rural beauty. Such a respectful balance of old & new. 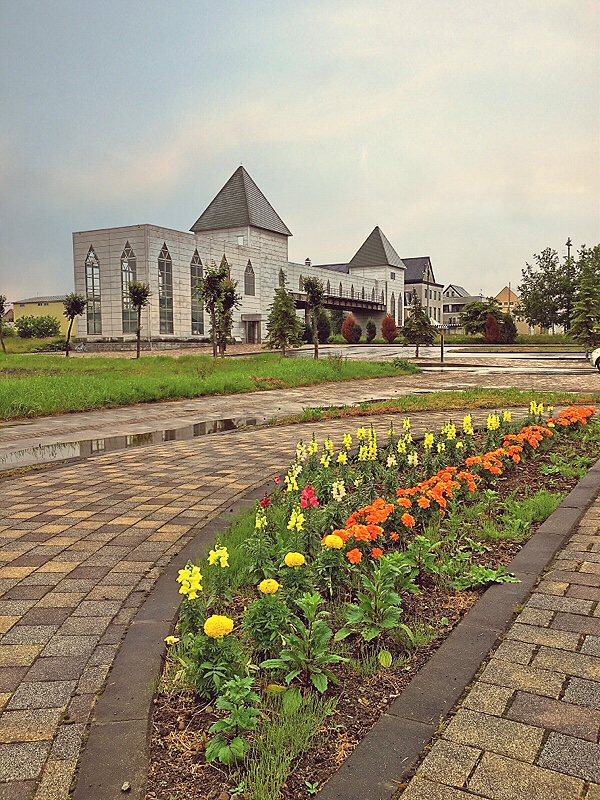