What do you do when you see scorpions, spider and snakes? 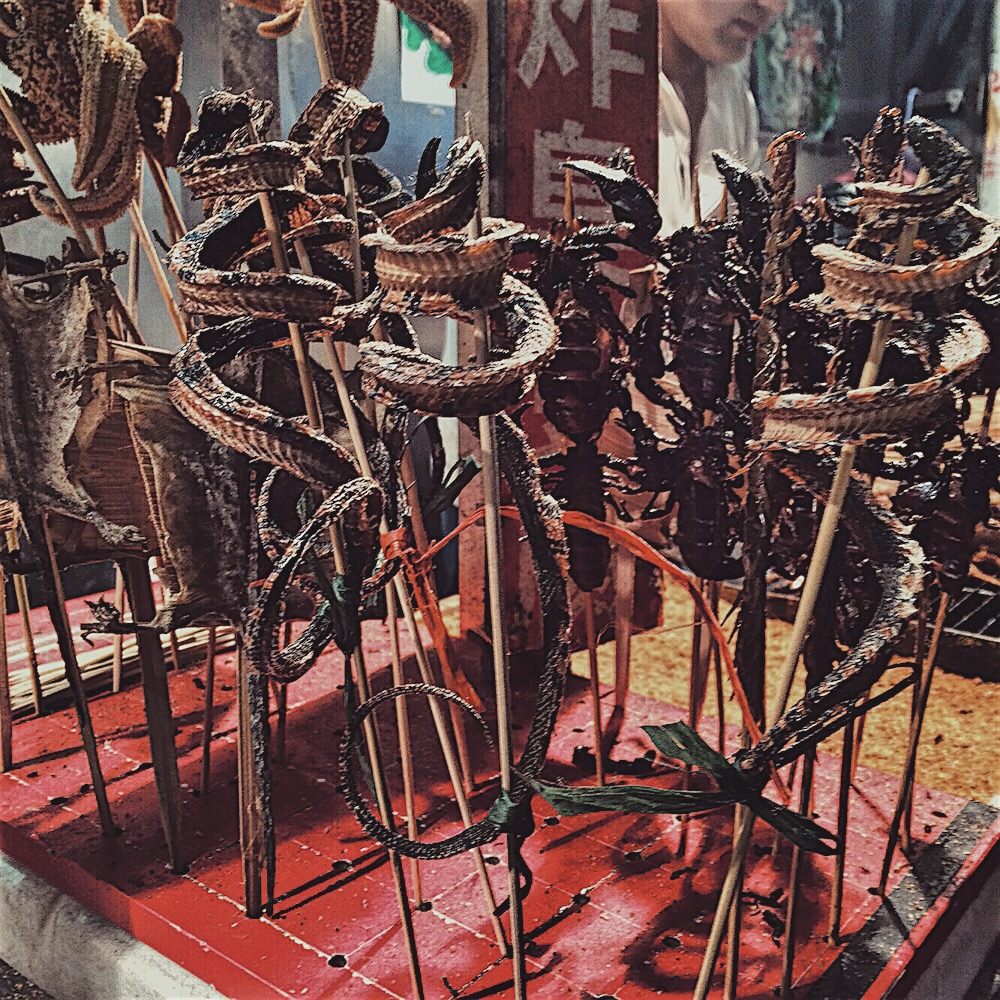 Why, eat them obviously! Haha!

I am actually never one to back down from eating obscure, okay fine, (rated as) disgusting foods from all the over world. 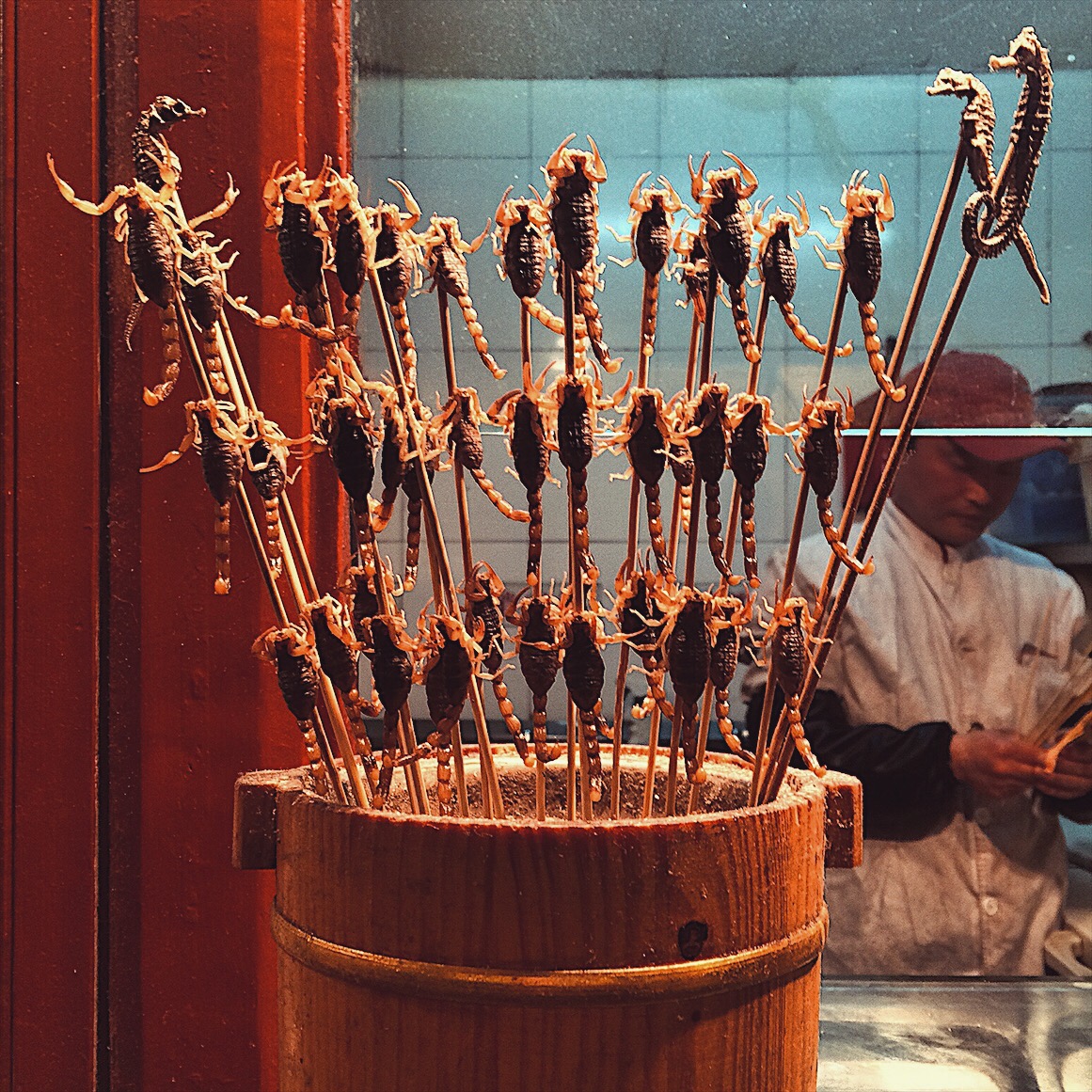 Rather than be revolted, I’m actually very intrigued! A country’s character and charm have much to do with its food culture.

Do I find it odd or even gross at times? Of course I do! It doesn’t mean though I wouldn’t be open to sampling it so I don’t remain ignorant.

Trying certain foods isn’t always about enjoying myself. It’s really about educating myself on global cuisines. 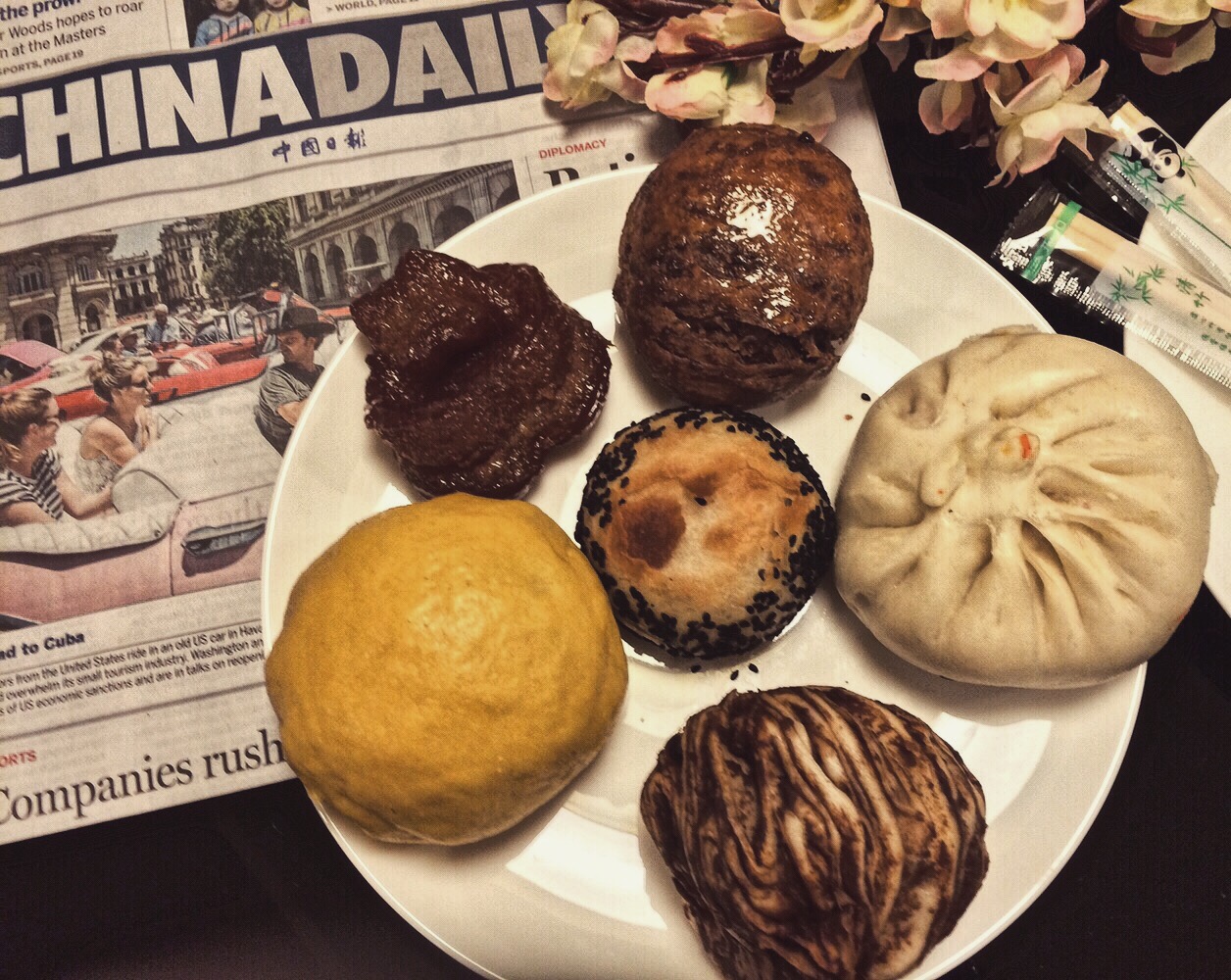 Just because it’s unfathomable for us, doesn’t mean it isn’t considered the norm elsewhere.
For example: elk, bear and reindeer meat are part of the everyday diet in most of Scandinavia, while snails are common appetizers in France and the Philippines.

You can snack on a variety of bugs and worms in Thailand. The poisonous Puffer fish is a luxurious delicacy in Japan.

Then as you’ll see in today’s episode, creepy crawlers are popular street foods in Beijing’s former (watch the episode to find out why) Wangfujing Snack Street or Donghuamen Night Market. 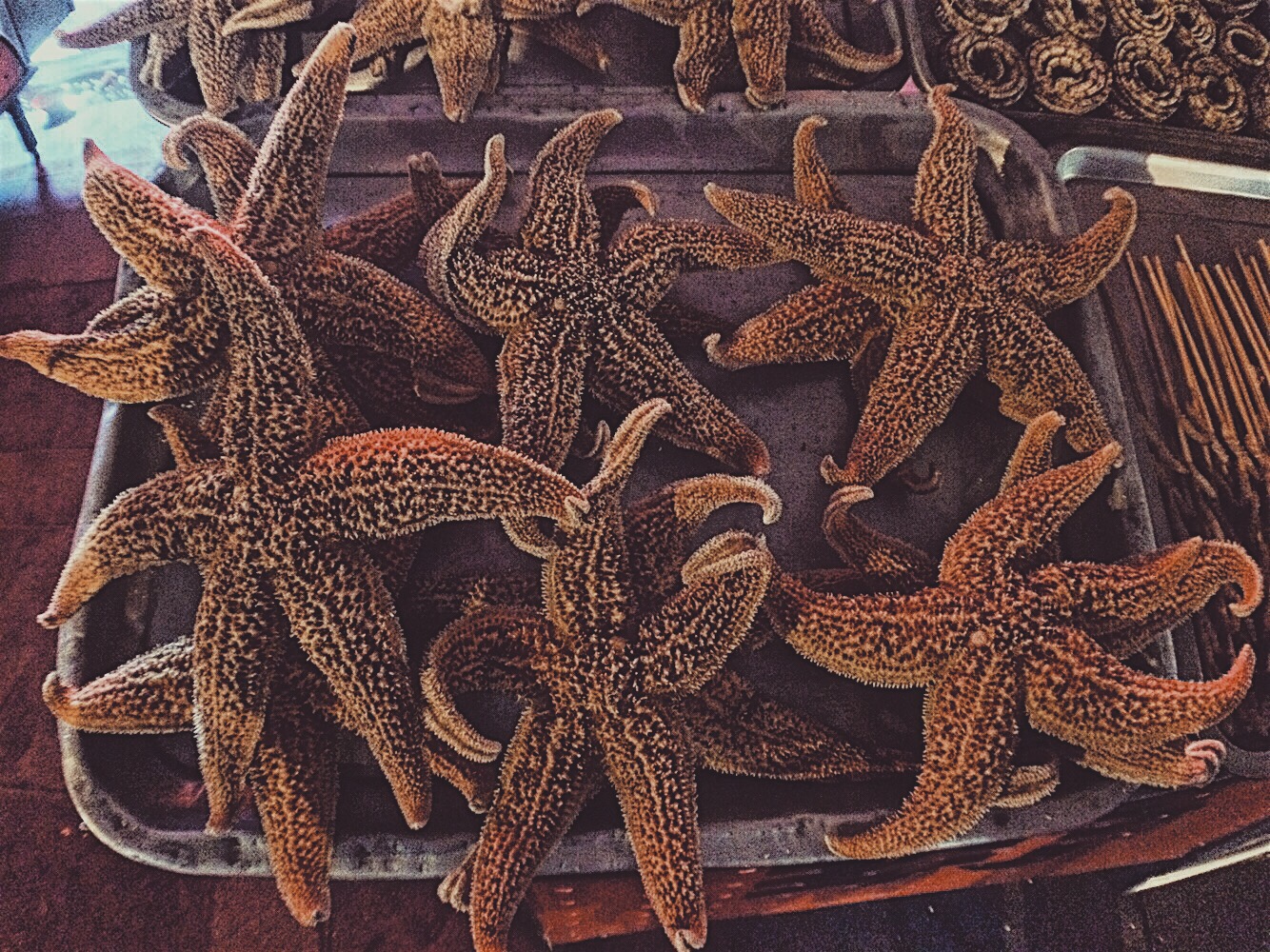 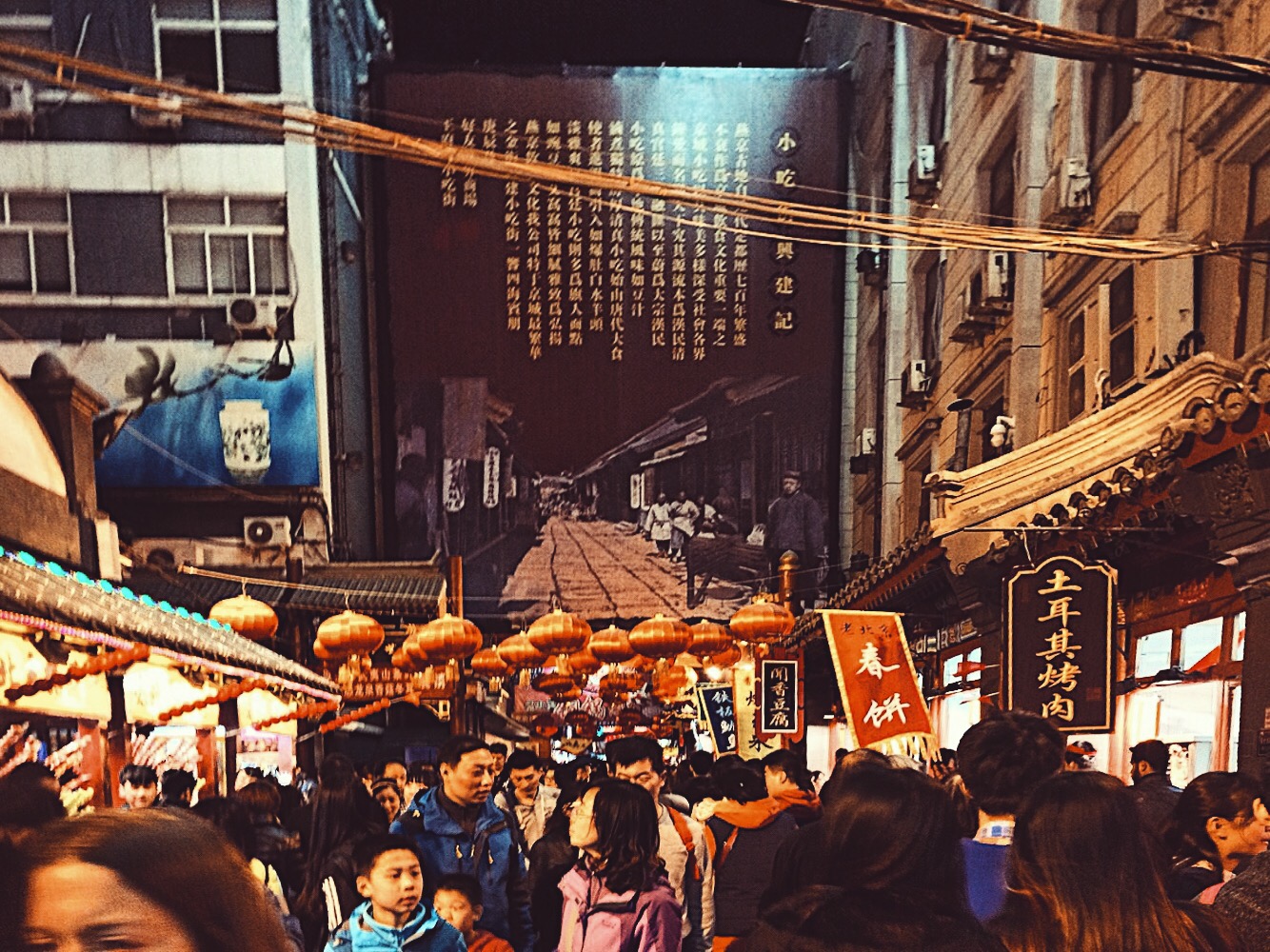 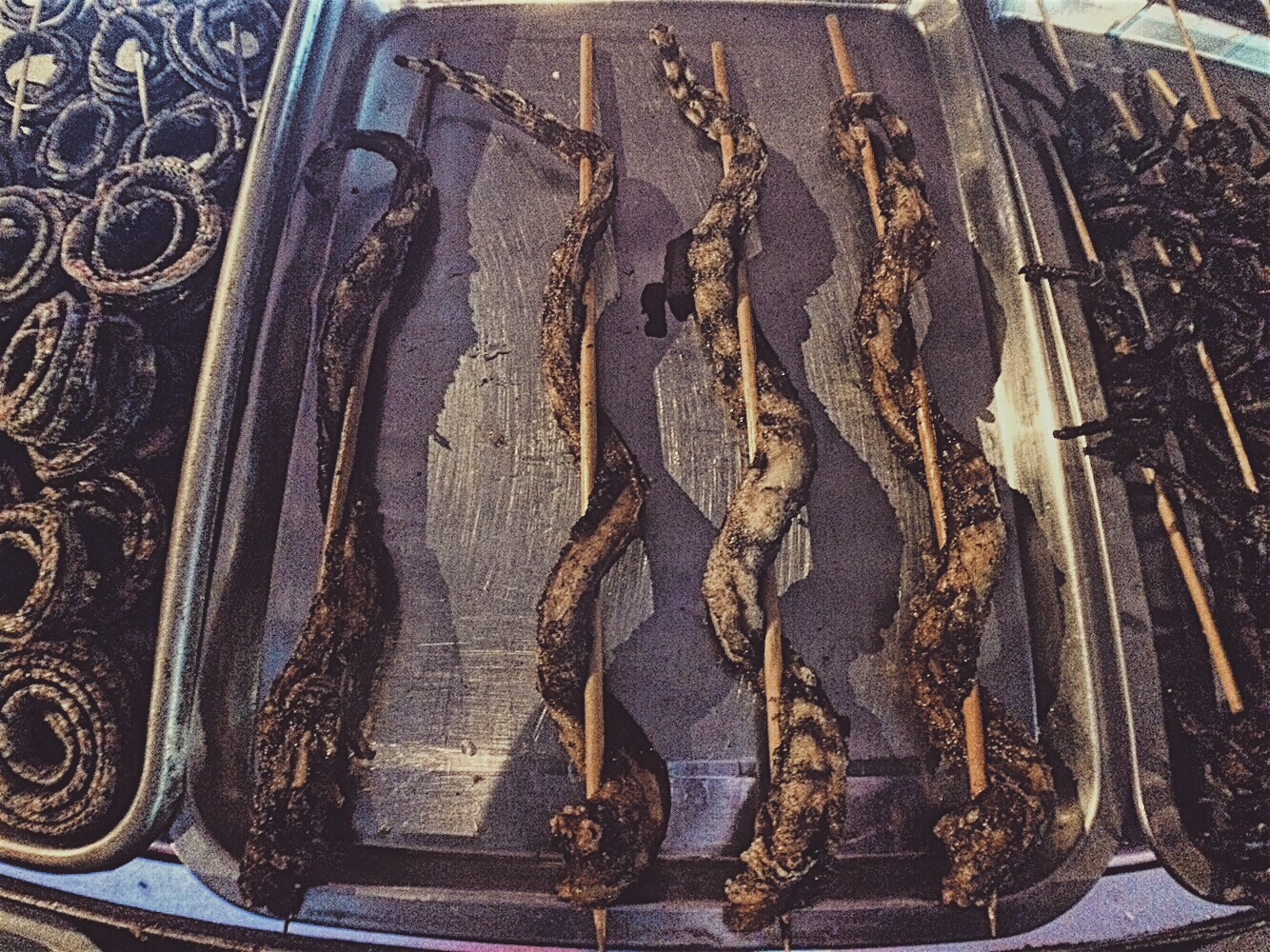 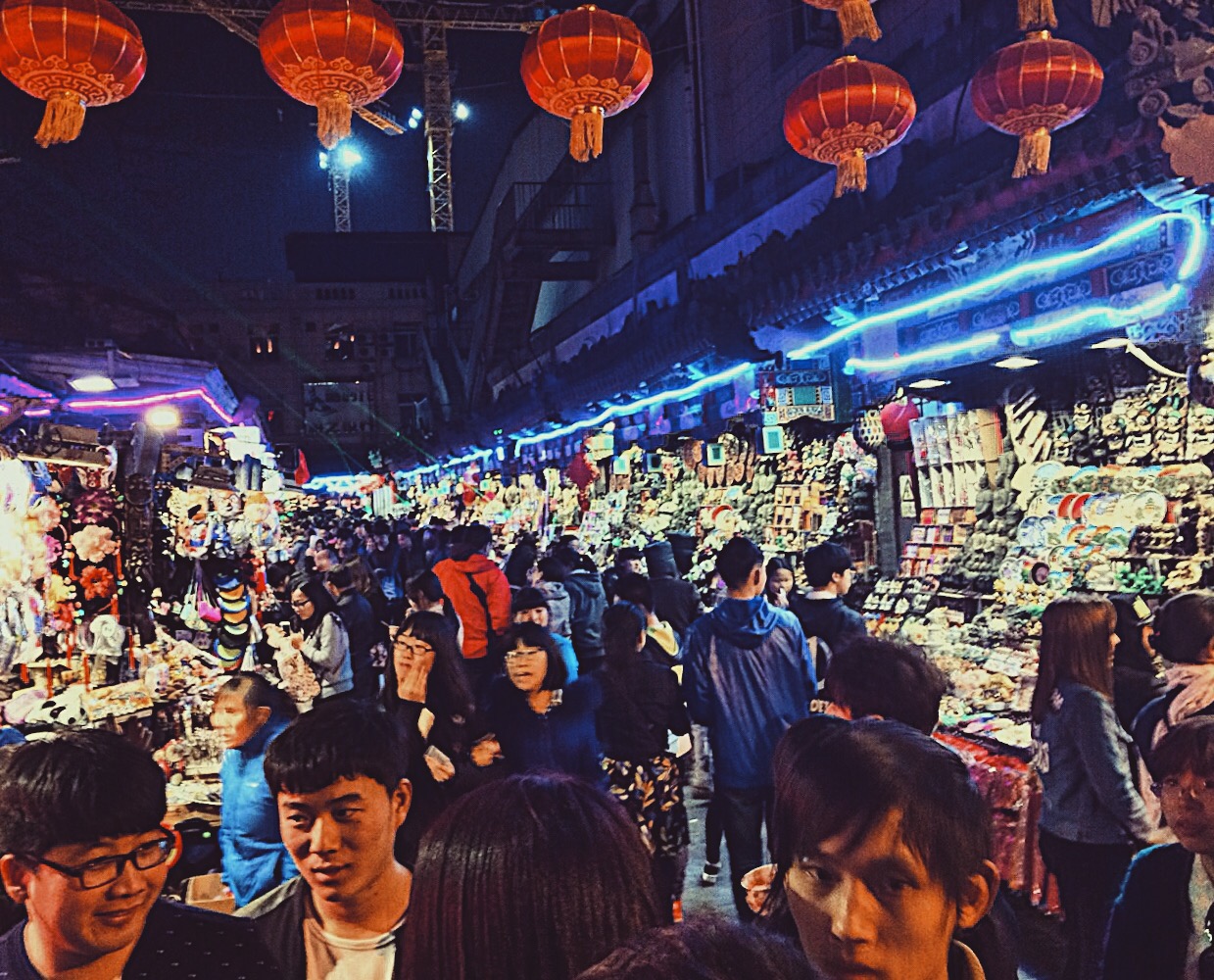 No matter what your beliefs or personal tastes are, part of being a global citizen is respecting other cultures with openness and tolerance.

It is not wrong or right: it is simply different. That is how you learn, grow and love and live life to the fullest!

Admittedly, I am still struggling to understand why dogs are eaten in China ( will excuse myself from that heated discussion for now)…

But c’mon, how could you not salivate over these curled up snake skins?!! It’s a like a pinwheel cookie on a stick! Haha! 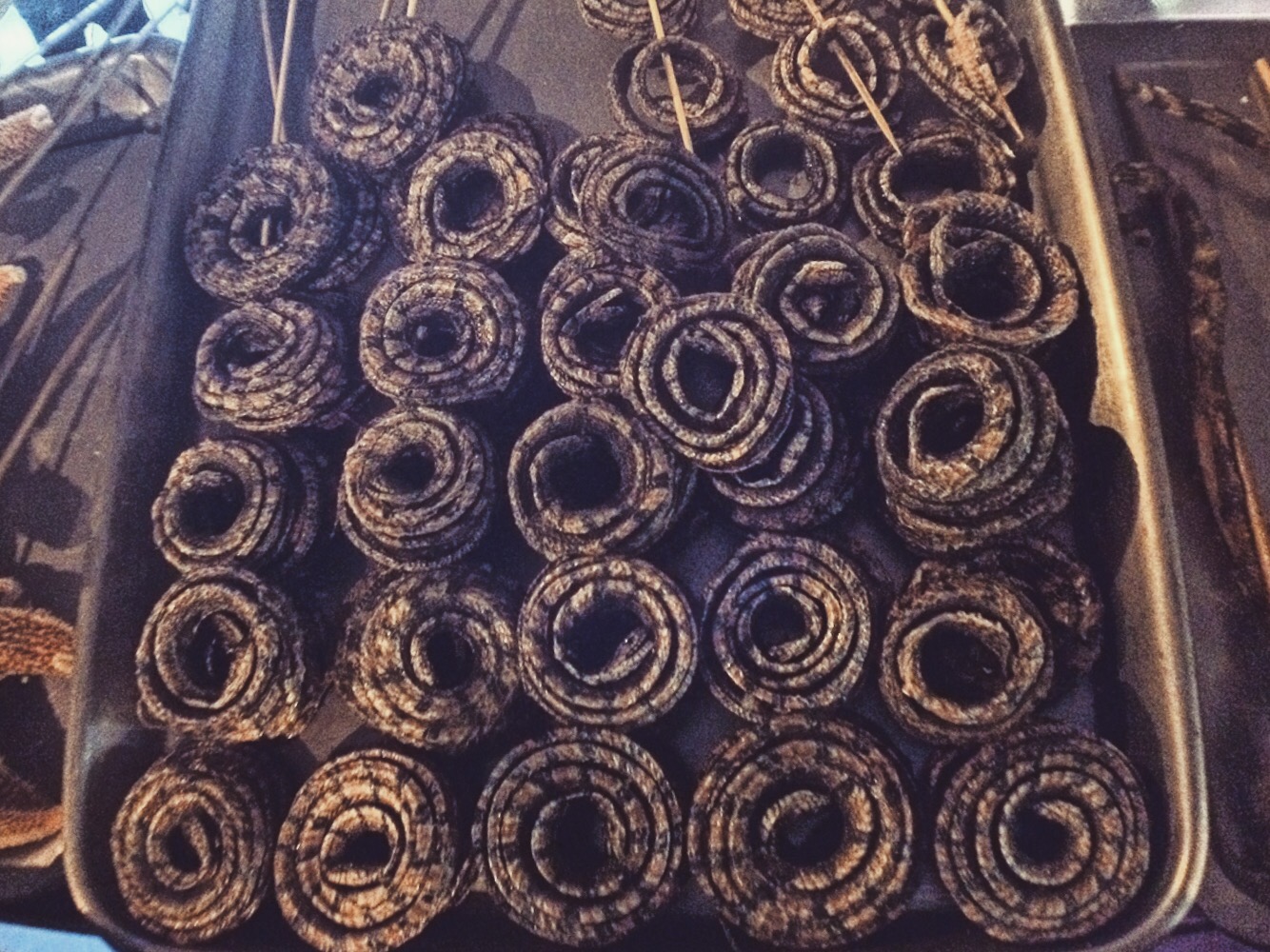 Here are sceeenshots from the video I shared on Instagram when I had some!

They uncurl the snake skin and “sew” it through a barbecue stick, as seen in the first photo. 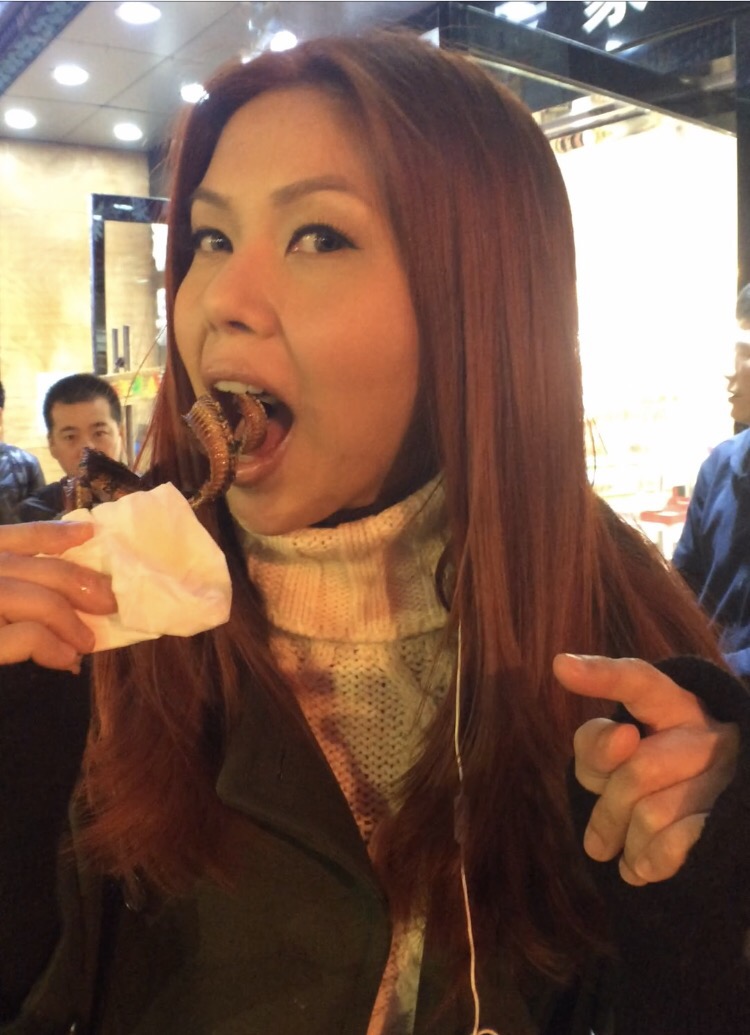 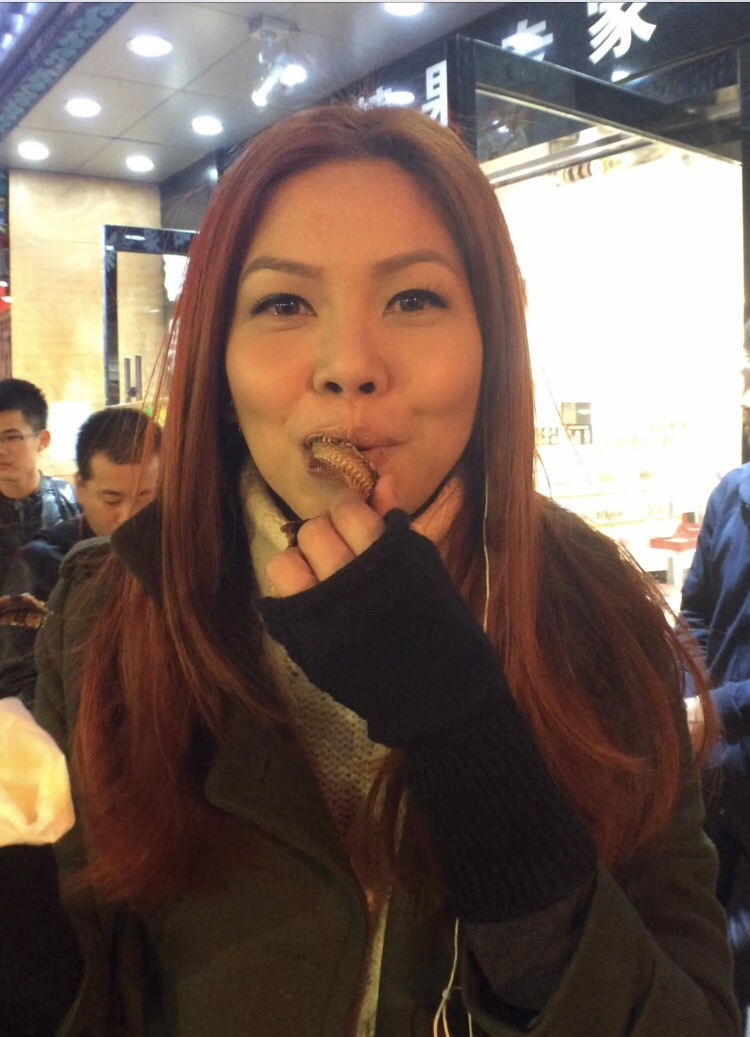 Whether you build an appetite or gag in vomit, haha, you’ll get to watch me wolf down scorpions, centipedes, sea horses, snakes, etc!
Can you guess which one was my favorite??? 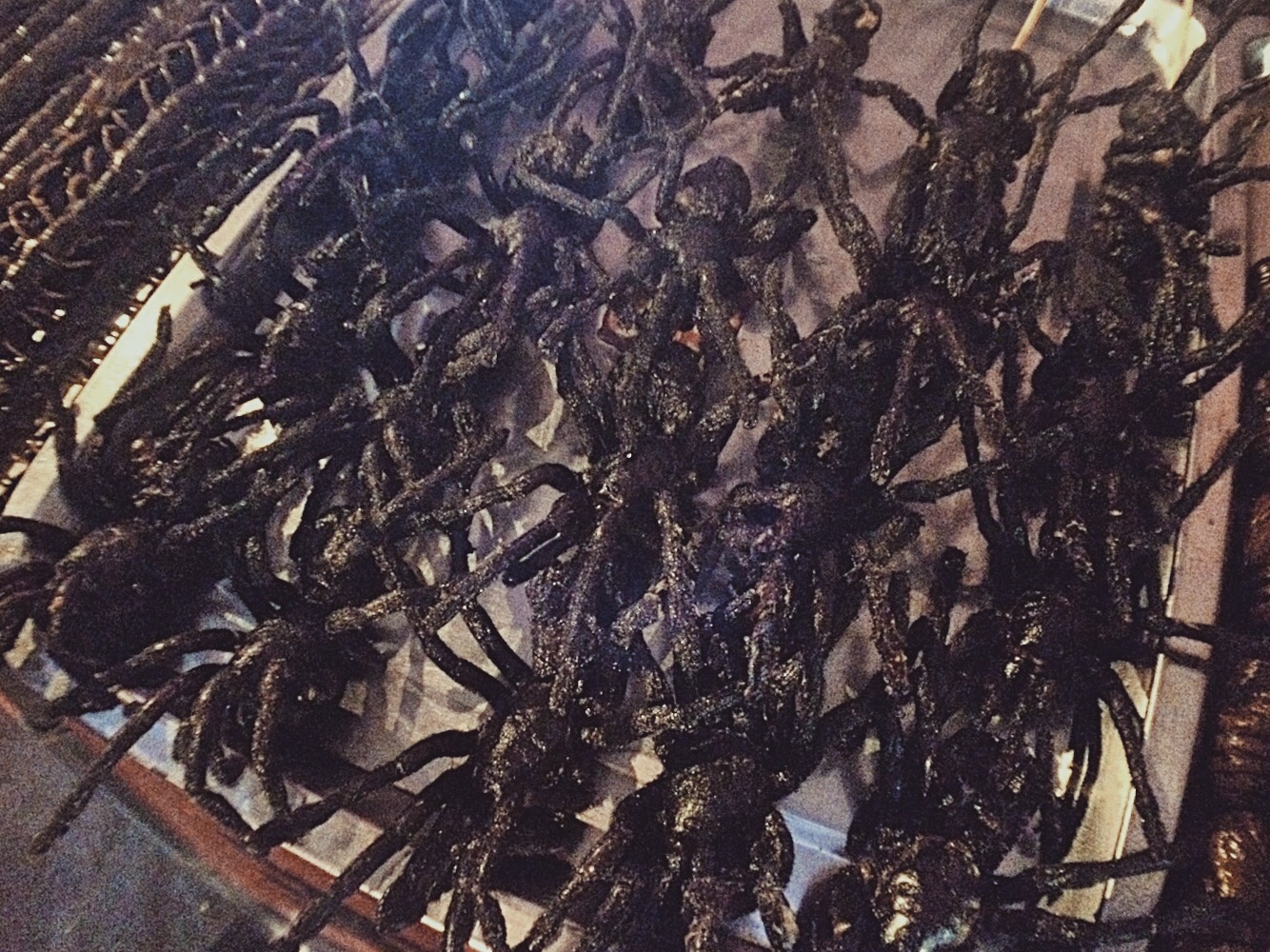 You’ll have to watch today’s street gourmet extraordinaire to find out!

Disclaimer: Some of you may already know I am a vegetarian. In some cases when it’s really difficult when I travel (Japan especially) or attend events, I eat seafood.

The one thing I really don’t and cannot eat is meat (chicken, beef, pork and the like) due to strict dietary restrictions from a medical condition.