From the Streets to Fine Dining: Top 10 Hanoi Food Tour

Hanoi is home to one of my favorite cuisines in the world – Vietnamese.

As the capital and political center of Vietnam, Hanoi is where you’ll find the mausoleum of revolutionary leader Ho Chi Minh and the now culinary Hanoi gem, the “Obama Noodle” at Huong Lien; made famous by Anthony Bourdain’s Parts Unknown.

Don’t worry, today’s delectable episode won’t dip into politics. The only dipping you’ll be doing is with some rice noodles as they do with Bún Chả.

I’m ecstatic to dedicate this Hanoi feature just for food – from the streets to fine dining. Rest assured I got more episodes coming up on Hanoi but for now, I’m taking you on a Hanoi Food Tour.

Gentle reminder as always: the meat of the story, no pun intended, is in the video. This written post merely serves as an intro to the VLOG post so make sure to watch!

Originating from Hanoi, Bún Chả or recently earning the nickname, Obama Noodle, you can find it at Huong Lien restaurant.

Usually served a la carte, you can (almost all tourists like myself) order the Obama Set which sums up to about USD5. Watch the episode as I take you inside the restaurant where Anthony Bourdain shared a meal with Former US President, Barrack Obama.

On a side note: Quite telling that when I asked where the Anthony Bourdain restaurant that was featured on CNN, no one had a clue what I was talking about. But the moment I said, “Obama,” everyone knew what I was referring to.

It’s so funny because I was more drawn to try the dish because of Anthony than I was of Barrack, to be honest. If you follow Bourdain’s shows, every single restaurant he features becomes legendary. To each his own recall, I guess.

Phở or Vietnam’s version of ramen is probably (in my opinion) its most popular global offering alongside fresh spring rolls and Bánh mì.

Phở is mainly served with chicken or beef. Ironically, during my previous trips to Vietnam, whether Hanoi or Saigon, I’ve never had the chance to enjoy a bowl because traditionally, vegetarian or seafood phở is just not an option.

Until my sister shared there is a snail vermicelli soup I could try as it’s a Hanoi specialty called, Bún ốc.

There’s coffee and then, there is Egg Coffee. Invented by Mr. Nguyen Giang in 1946, the cult following of Giang Cafe’s lusciously liquified custard-like drink is not only with the Hanoi locals but even to avid coffee drinkers from all over the world as well.

Leave it to Celebrity Chef, Restauranteur & TV Personality, Gordon Ramsey to put this restaurant’s name on the map.

Chef Ramsey may have left but the dishes he helped create for the menu leave a memorably distinct local flavor in your mouth.

Watch how my sister and I pretty much ordered the entire menu to try, lol.

Shame on me for forgetting to get the proper Vietnamese name of the dish but Quán gốc Đa is a one stop shop for all things fried.

Apparently, for every type of fried dumpling, there is a specific name.

Fried dumplings are a very popular street snack in Hanoi, served in various ways. This one (I elaborate in the video) is served with fresh herbs, which you wrap the dumpling in then dipped in a vinegar type of sauce. The herbs and sauce are such a staple in Vietnamese cuisine as the freshness and acidity, respectively, cut the greasiness in certain dishes such as this. 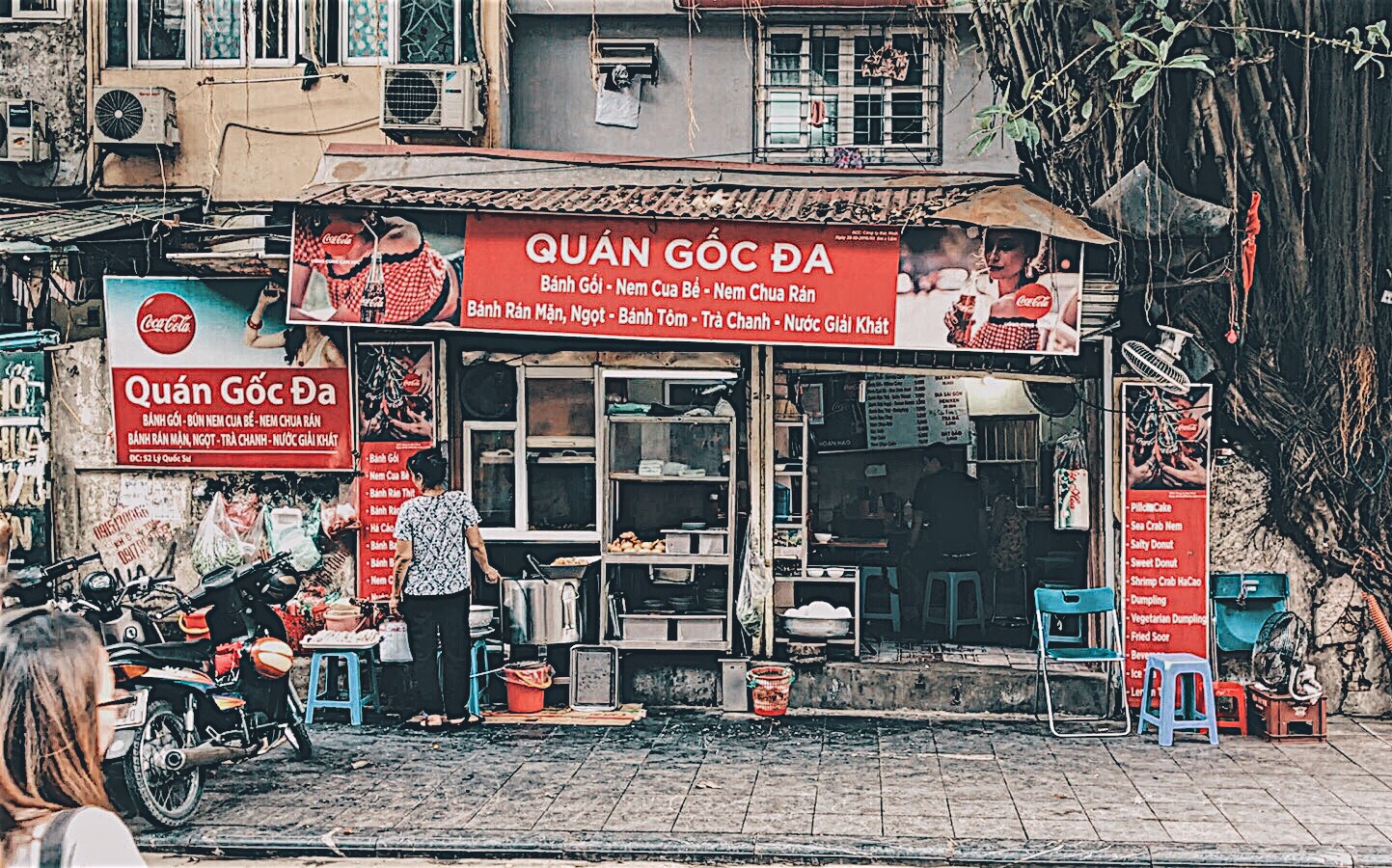 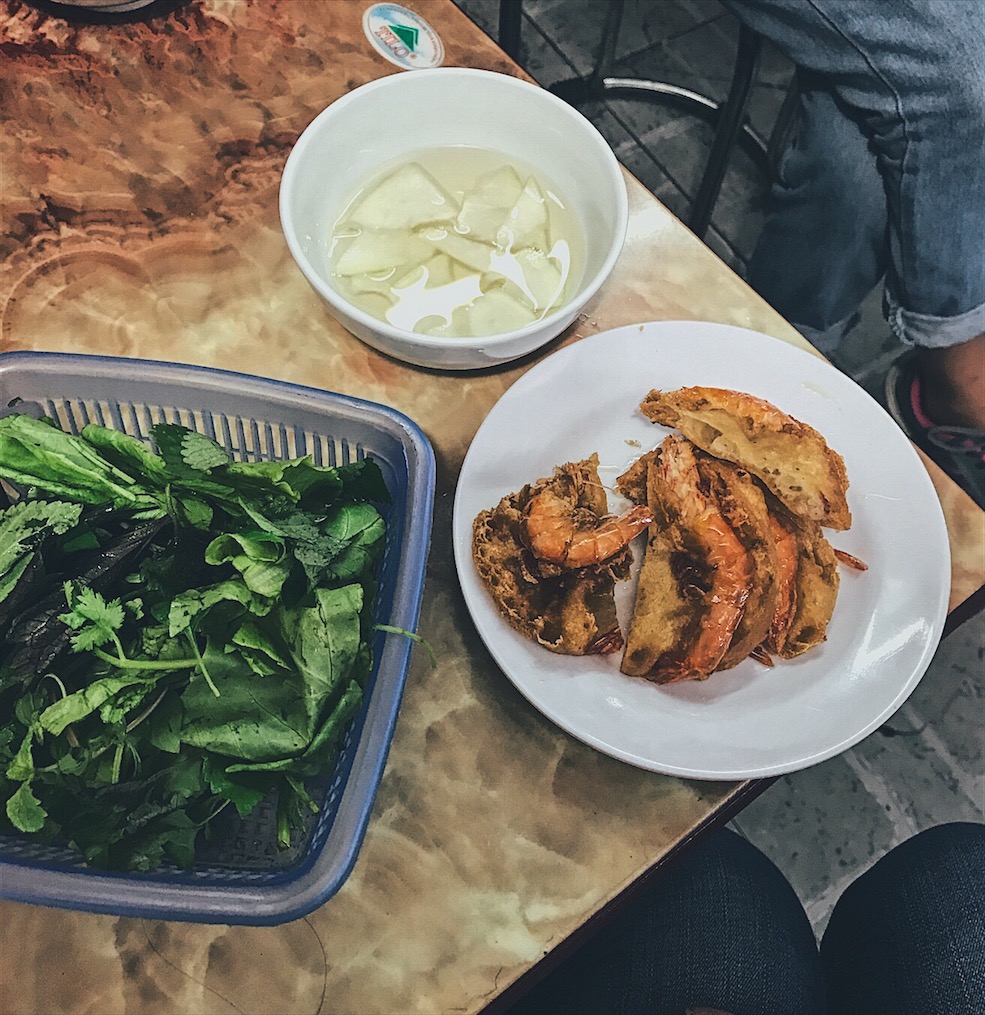 Don’t you love eat-all-you-can setups but oftentimes never get to try everything because the servings are too big! Then you feel guilty for wasting food so you stick to the food on your plate and are left wondering about the other dishes.

I feel your pain!

Luckily, Ngon Villa is an eat-all-you-can restaurant with a fine-dining setup.  It serves a delightful array of Vietnamese dishes from various regions. Order as many tasting-menu-sized items as you want without the guilt!

It’s actually not as small as one would expect from a typical tasting menu. Servings are still relatively big and just delicious!

Littered all around the city, cafes like Kim Lai Cafe sell specialty coffee beans and grounds.

Next to Phở and fresh spring rolls, Vietnam’s version of a sub sandwich, the Bánh Mì, is a popular on-the-go street food. Just like Phở, it is commonly served with meat barbecues or as a sweet snack with condensed milk.

In past trips until now, I continue to search for street vendors who sell a vegetarian or even a fish option. Yes I know I can find those varieties in specialty restaurants or cafes (more often than not, outside of Vietnam) but no matter what anyone says, for me, there is really nothing like enjoying local delicacies right off the streets.

So I merely just admire the locals and tourists chowing down on their own rustic French baguettes. 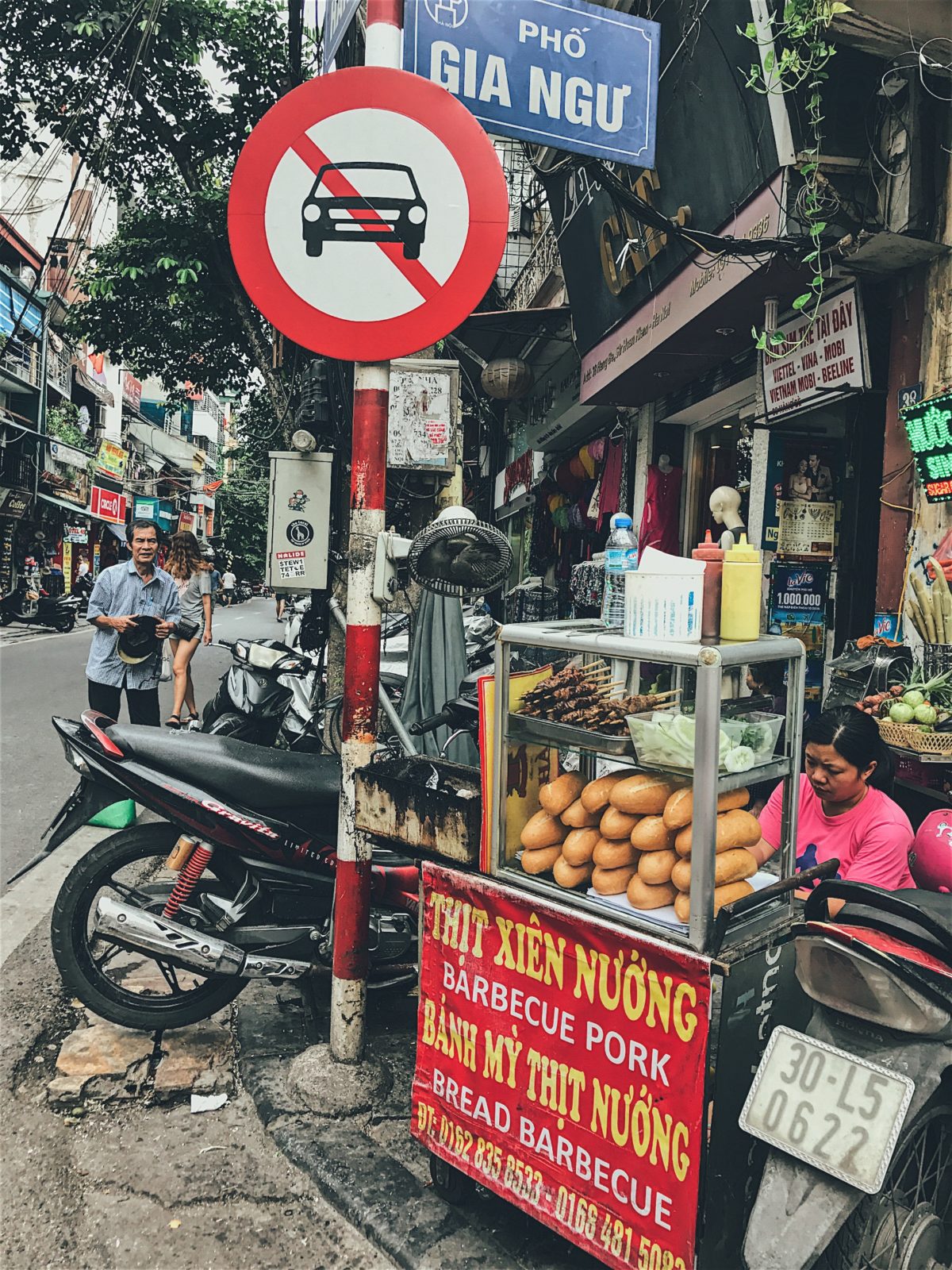 Thankfully, there are many places that satiate your cravings like the Paris-inspired cafe La Terrasse at the Sofitel Legend Metropole Hanoi.

This is where my sister and I spent the afternoon for high tea (and for me —- hot-guys-by-the-pool-watching, haha!)

Until I saw the menu serving a smoked salmon Bánh Mì! Of course this was my chance to finally try, what for me is such an elusive street food. Only this time, it’s the gourmet version. Can you tell by my loving gaze?? 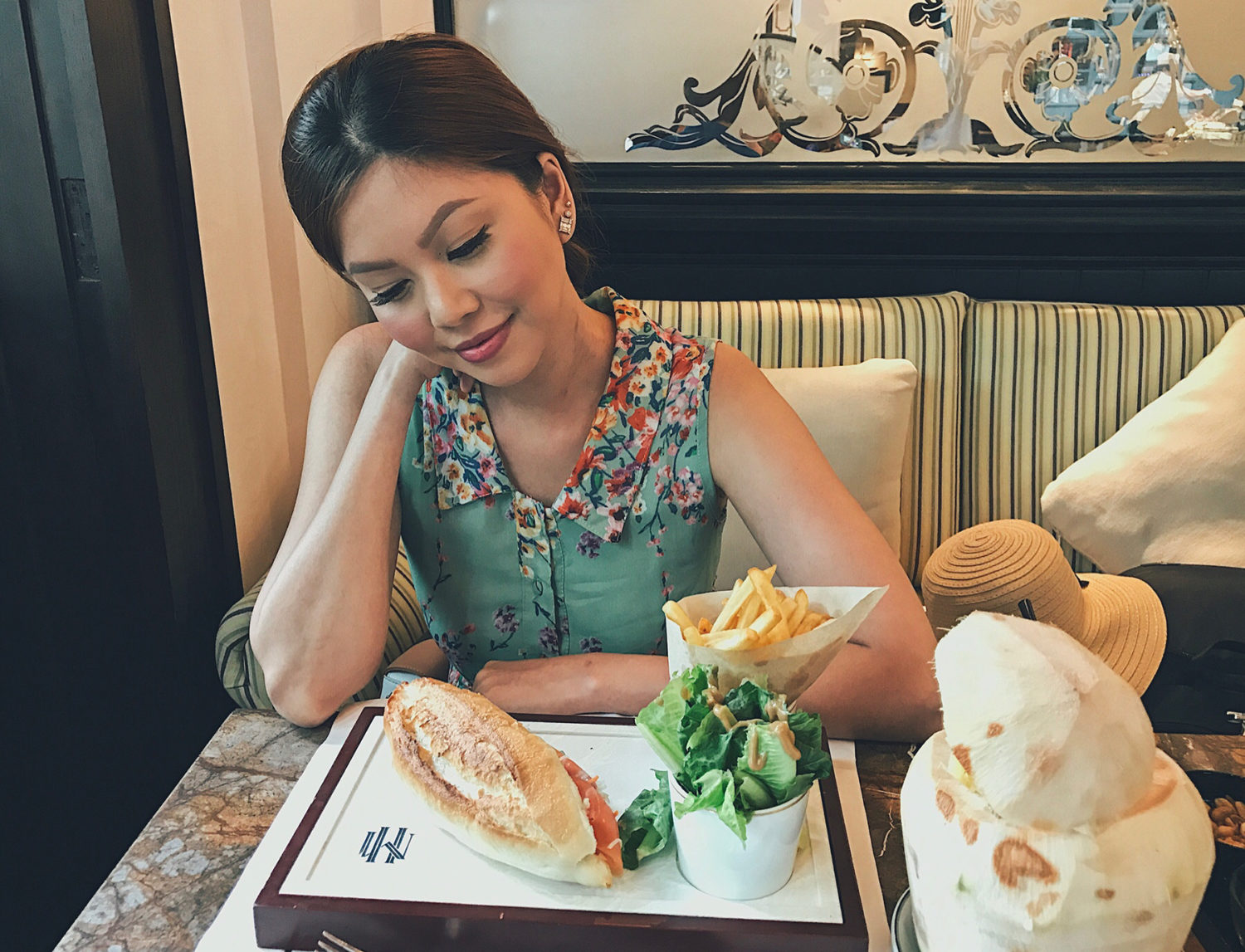 So my canapé became more like a massive sandwich!

Now I can understand if street food isn’t your thing and international dishes are more up your alley.

Might I recommend the fine dining restaurant of the Lotte Hotel Hanoi is a two-for-one special.

At Grill 66, apart from savoring premium steak, seafood and wine, you also get a 360-degree view of Hanoi. Hence the name as it’s on the 66th floor. No worries, all good vibes here!

Cap off the day with a view of the city unlike any other. Just right above Grill 66 is the Lotte Hanoi’s must-visit hotspot – the Top of Hanoi.

The open modern bar and restaurant occupies the whole rooftop of the hotel.

The Lotte Hanoi is currently the second tallest skyscraper but also the tallest hotel in the capital city.

In terms of customer service, it has to be one of the best hotels I’ve stayed at in the world! Yes – in the world, I said.

An episode on hotels coming soon!

It opens from sunset until the wee hours. I happen to chance upon a DJ’s booth, which I presume becomes a club at certain days or events.

You ready to watch?

You can check out more food posts here and here.